There are a few basic mechanics in faction war that catch many new players out. You cannot warp to someone on grid at a plex gate, best you can do is warp to the beacon at range. You cannot warp anyone or anything inside a plex. You cannot dock in a low-sec station if the opposing side control the system.

A few basics that you learn once the hard way and never forget. Of course the first two you can make work for you with clever use of tactics. The last one, well you occasionally get the odd person trying to dock when they are not allowed and gives you an easy kill mail.

This week Quantum Cats Pilot Justari was having a sleepless night around our home system of Nisuwa.....

There I was around 3-4am my time, all alone in Nisuwa chasing lame plex-running squids farming loyalty points. When I logged in they had the system at 6% contested, how very dare they! I was working with my Atron just chasing stuff around when I saw a random cyno pop up. At the time there were three war targets, myself, and one neutral in system. I though "No big deal, in about five minutes im going to go kill that with something".

Then an odd thing happened on D-Scan and in the local channel simutaneously, +1 war target, +1 Revelation class dreadnought.

The squids have set staging POS' in Nisuwa before so this sort of thing is not completely unheard of. Until I saw the range, it wasn't at a POS, it was at the station!

As fast as possible I warped to the cyno, and sure as shit the Revelation was sitting there right on Nisuwa Station! With time against me and other hostiles around the system, I didnt know what to do so I just began to lock down the Revelation with 1 scram in my weeee Atron. I immediately notified the militia folks in the intel channel because there was hardly anyone else in system at that time of day (night). There was I, piloting one of the smallest ships in the game fighting one of the largest. Five minutes had past and I was trying my damnest to hold him down while my batphone responders were burning to me.

Two other random Gallente Militia friendlies entered system, one ignored my calls for help (I PM'd him as yelling in local would have lost the kill), and finally the other came in an extra point. A fellow QCat came by within the 6 minute mark, and at around 7-8 minutes in GMI's began to trickle in with BS and down as you can see on the kill mail.

I believe around the 15 minute mark the thing was dead. I got 400million (estimated worth of the two guns and all the stront). I dont really understand what the REV was doing, it was an Amarr Pilot and the cyno was at zero on station, my assumption is that he either thought he was docking (HAHA...NO!) or was using Nisuwa as a midpoint cyno to his final destination and simply didnt know how to react to my ballsy Atron. All-in-all, a good time for me to randomly decide to log in in the early hours (I've been so inactive from work and RL there has been little time to EVE). 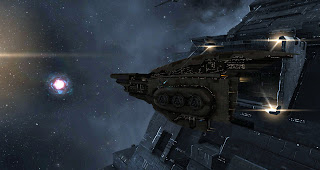 Artists Impression of the Initial Tackle

There are some unanswered questions here though. The biggest one would be, why didn't the Revelation pilot convo the three Caldari Militia pilots in system and ask/beg for help? Local will have shown up quite clearly that there were allied militia in system with him. Three of them on one Atron and he could have easily escaped.

Oh wait. Farmers. With the cloaking devices and the full rack of stabs, it would have taken them longer than the fifteen minutes to lock an Atron.

But seriously, why didn't he ask for help? It gets even more bizarre as we hear the account of Quantum Cats Syndicate pilot Alandrix Deck who logged on after the Revelation had been tackled.....

So yesterday morning I get back to my PC and I see Justie post in corp that he'd tackled a Rev on the station. I have to admit that the first thing that went through my mind was 'Yea right, what have you been smoking' but I make my way over there in my Incursus.

Sure as shit, I get to the station to find Justies Atron circling a Rev! I dock up and start looking for a proper DPS ship to undock, with Justie going mad in Corp chat telling me to hurry the fcuk up:) Thankfully I have a blaster Naga handy, with a point fitted, and I undock and start blasting. The Rev pilot them convo's me with an offer for 100m to blow Justie up! I had a good chuckle and we proceeded to burn him down, with local slowly filling up as people came to help with a cap kill.

Nice catch and a good way to start the day!


So there you have it. A derp of the highest order followed by the quick reactions of a QCats pilot netted a 4bn ISK capital kill on the undock of our home station. And the war target actually offered 100m to one corp mate to blow his other corp mate up? Wow!
Posted by Drackarn at 8:20 AM